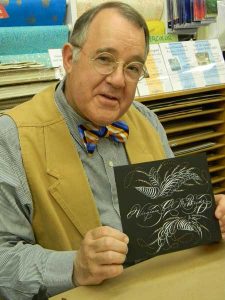 Michael R. Sull began studying calligraphy and trained under Messrs. Bullock, Fairbanks and O’Hara. In 1981 he joined the staff of Hallmark Cards, Inc. in Kansas City, Missouri as a calligrapher/lettering artist.

As an expert on penmanship, he was Ronald Reagan’s calligrapher after his Presidency and known worldwide for his skill and teaching ability.